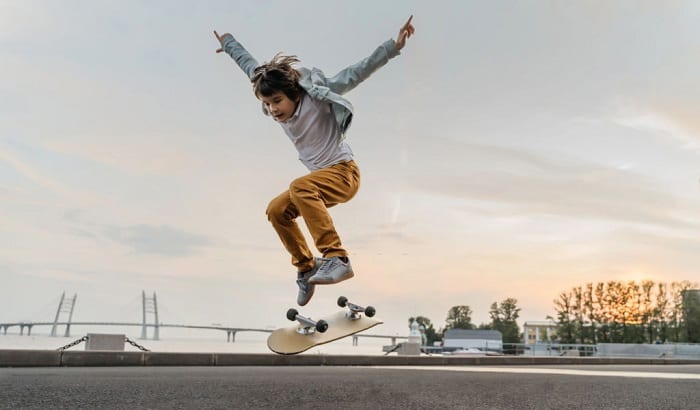 In every street, skateparks, and skate rails, you may encounter skaters, and each of them has their own styles. Everyone starts with the basics until they reach their desired skating style.

You may meet skaters doing complex tricks that you aren’t familiar with and asking yourself, how many skateboard tricks are there?

In this article, you’ll learn the pattern and tricks, and you may practice them at your own pace. You will never run out of fun stuff to try, so let’s roll on!

How Are Many Skateboard Tricks There?

The tricks are unlimited. There are countless tricks that you may find out there thousand and thousand of all skateboard tricks. But, in this article, we’re highlighting all the popular ones such as Bertslide, Lien Air, Ollie Impossible, and many more.

It is skateboarding; it’s all about the tricks. Your skating style will define the ones you understand. You may opt to learn or focus on the type of tricks you want to do.

Also, it’s the recognition you’ll get for the big stunts or technically skilled tricks. There may be countless skateboard trick lists, but there are stunts that you may count on that will undoubtedly challenge your skills.

It’s incredible to see the complex tricks, but remember, there are no actual shortcuts to success in skateboarding.

There are, however, shortcuts to mastering a method and forming patterns that will lead to a more refined, adaptable style in terms of types of skateboard tricks.

Those aspects will influence your skills in skateboarding and how well you will carry out your talent. Anyway, listed below are the “Legendary Tricks” that you may perform if you’re an experienced skater. In further detail, I’ll be discussing the list of all skateboarding tricks that you might do as a beginner.

Kelly Lynn is the inventor of the layback air trick. He liked frontside laybacks in surfing, so he adapted it to skating. In 1978, in Gainesville’s Sensation Basin, he nailed the layback air. The challenge for him is to do the trick upside down and in larger terrain.

Around 1977, Tony Alva, nicknamed “Maddog,” invented the frontside air. The front side air revolutionized skating by allowing the rider to lift off the ground and fly vertically into the air. Although other skateboarders (San Diego – skateboarders) did it simultaneously, Tony’s technique and ability to perform it higher in pools made it renowned.

Neil Blender is a legend in the skateboarding world. Neil was ahead when skateboarding evolved artistically. He created board graphics and tricks. He made the skateboard more than a piece of wood for doing tricks and usually done on hips, pools, or ramps.

Lance Mountain is one of the admired skaters. He has seen contributing to the development and providing improvements in skateboarding and has positively impacted the sport. In the late ’80s, many street skaters adopted the technique on the flat ground and then, on ho-hos, finger flip variel plants, one-footed plants, yo-yos, and such.

Other top freestylers have learned and modified this technique to their performances. In the 1980s and early 1990s, street amateur skaters such as Jason Lee and Ed Templeton adapted the impossible ollie trick into their skating style. This famous trick has been adapted into three different skating styles: street, freestyle, and vertical. It is considered one of the legendary tricks.

He invented the 360 kickflips, sometimes known as the tre flip, and Rodney Mullen developed it. He tried with the 360 kickflips on his freestyle board about 1984, but most skaters couldn’t keep up with this sophisticated technique.

In many professional skaters’ video segments, the tre flip has become a must technique. The 360 flip is a famous street trick performed on various obstacles in so many different ways.

These tricks are complex and need advanced skills to perform, but step by step, you will eventually learn this by yourself and show off your skills through the years of practice. Those skateboard trick names aren’t just a name, and it is a skill you need to show off to pay tribute to the inventor of the tricks.

On the other hand, here is the list of skateboard tricks that are common tricks you might perform as a beginner. It requires you to have patience in practicing these tricks. Remember that no one starts at a pro-level; everyone starts with the basics.

The Slide and Grind Tricks

The majority of these techniques are similar to one another, from easier ones to harder ones. It will be simple and fast if you start with the easier tricks and work your way down. Whatever you choose, keep in mind that an amateur skater practices from time to time.

Skateboarding has several benefits, including enhancing cooperation, pain threshold, stress reduction, and reaction time. Skateboarding improves hand-eye-leg-and-foot coordination. If you want to skate quickly and precisely, you must adjust your motions when you are skating.

So, how many skateboard tricks are there? Clearly, there are plenty. If you’re a skater, you’re undoubtedly aware of this.

Don’t stress over whether you’ll be able or not to pull off those insane amateur skateboarding stunts. Because as you gain experience, it will contribute to your current skill and progress throughout the years. However, you must ensure that you receive instruction from an expert if you intend to use what you learn.

So, if you find this article interesting, share this with your friends or co-skaters!