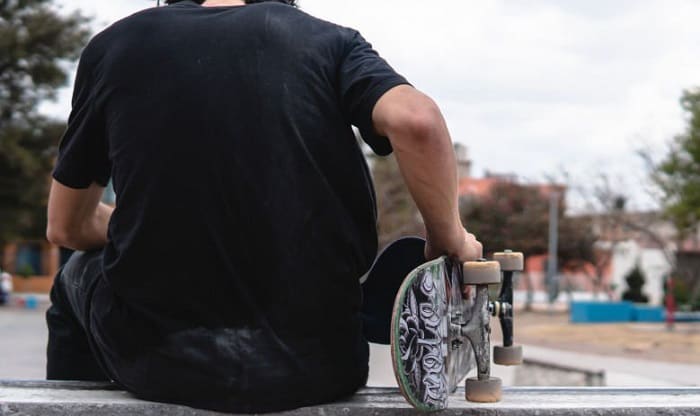 Maintaining skateboards does not only entail cleaning them or changing their parts. It also calls for the appropriate ways of using and carrying them from point to point.

Keep reading this article as we discuss why mall grabbing is problematic and what we can do about it.

Reasons Why Mall Grabbing is Bad 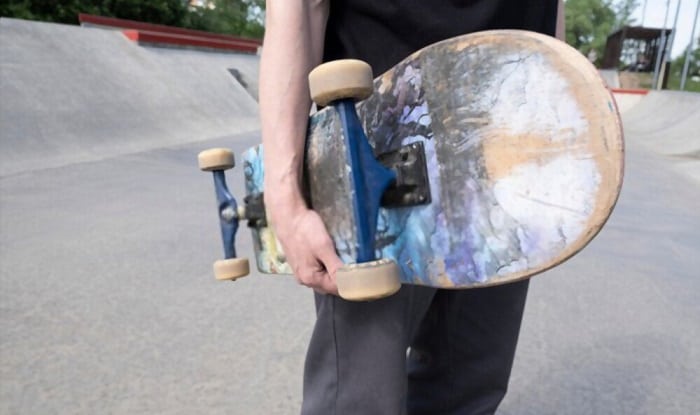 Perhaps, you’ve seen someone hold their Enjoi mall grab skateboard or any brand, really, while walking around. If you don’t know what mall grab slang is, just look at the photo below and notice how the person carries his board.

Doesn’t look that bad, right? That said, there are reasons why people don’t view mall grabbing favorably. Check them out below.

Most poseurs, as many call them, will mall grab, and these are often people still learning how to skateboard. These individuals believe they look stylish when they hold their skateboards on the front truck.

Unfortunately, skateboards aren’t accessories. They are not even designed for fashion purposes. And people who hold a skateboard by the trucks give off the impression that they don’t know how to skate.

Mall grabbing a skateboard means its grippy side grinds against your pants, or worse, your leg skin. So besides dealing with the opinions people have about mall grabbing, you might have to spend more on new pants.

Some would feel safe wearing shorts when skateboarding and holding the board by a mall grab. Unfortunately, this may result in skin irritation.

3. You’ll have greasy and dirty hands.

It’s not only the wheels that deal with dirt and gunk. Some of these particles stick to the skateboard’s trucks.

So, imagine holding skateboard by trucks with the grease and dirt coming from where you’ve been riding the whole day. What’s worse is rubbing your messy hands against your shirt accidentally.

4. The board feels awkward to throw down.

Imagine releasing your skateboard to the ground by its front truck, not its nose. It looks awkward, right?

Instead of burdening yourself, it’s better to hold the skateboard comfortably and allow yourself to put it down conveniently.

What is Mall Grabbing?

If you can think of ways to hold a skateboard other than by its trucks, you’ll understand why mall grabbing is undesirable. So what is the mall grab meaning in the first place?

Mall grabbing is an unorthodox way of skateboard grabs, in which the board is held through their front trucks, leaving the other side hanging down.

It causes the grip tape side of the board to face the skater, leaving scratch marks against the pants or other parts of the body.

This method of bringing skateboards is also a custom for many posers who treat their boards as accessories without knowing how to ride them.

What is the Right Way to Hold a Skateboard?

If you don’t have a skateboard bag or holder, the ideal way to bring a skateboard is through its deck. Hold the deck from its middle, so its length is perpendicular to your body, and, of course, the trucks should face out.

Other skateboarders on Reddit will advise you to do whatever makes you feel most comfortable, and they’re also right.

Nonetheless, we’re not spending on skateboards only to hold them most of the time. If you have the chance to ride it, do it as you will improve more. 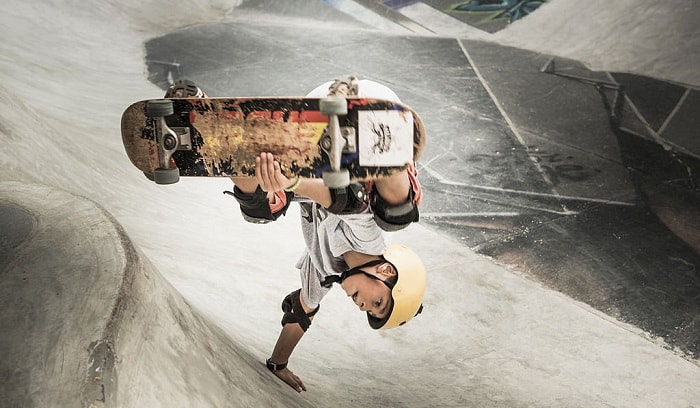 Is it bad to hang a skateboard by the trucks?

Of the many ways to store a skateboard, hanging it by its trucks has downsides.

If we hang a skateboard on its truck, there is a chance that the axles will get damaged. Especially for slightly heavy boards, the weight can put too much pressure on the trucks and might cause them to break.

Despite this drawback, skaters who insist on this method invest in quality hangers that would not compromise the truck.

When was mall grabbing invented?

Such events happened in the early 2000s, when there was friction between longboarders and skateboarders.

When did mall grabbing become a thing?

Mall grabbing was mainstream during the late 90s and early 2000s. These include the years when the sport was under refinement.

Years later, this method of carrying boards was still popular, but it had already left a negative impression on many skaters. Non-mall-grabbing users branded others who mall-grabbed as posers or people who did not know how to skateboard.

And since then, mall grabbing has become a ‘questionable’ act for many.

As many skateboarders say, how you treat and carry your skateboard represents you. Mall grabbing was a norm in the past that eventually acquired negative connotations.

Why is mall grabbing bad? Most responses we’d get are: because the trucks are messy, the grip tape damages the pants, and it’s unlike the behavior of a real skateboarder.

But whatever the reason is, what’s much more significant is that we care for our boards correctly and become better skaters. So, do what makes you most comfortable and helps you grow. 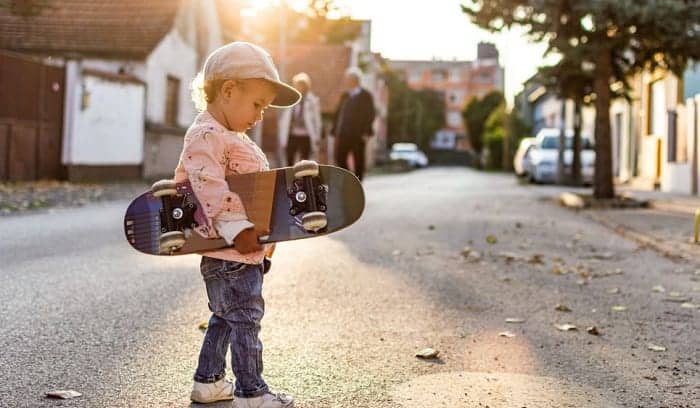 The Best Skateboards for 3 Year Old

Wise men say that great things start with small beginnings. This nugget of wisdom also applies to skateboarding, in which the younger your kids start, the … 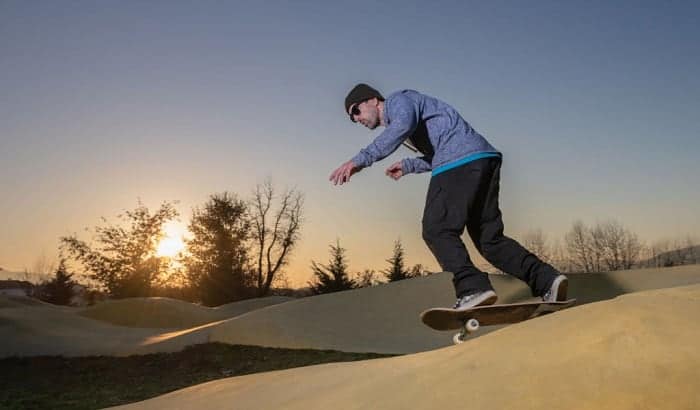 How to Pump on a Skateboard – The Simple, Quick and Easy Way

A skateboarder’s journey does not end on knowing how to turn or drop in on a skateboard. If you have witnessed skateboarding tournaments, the best riders … 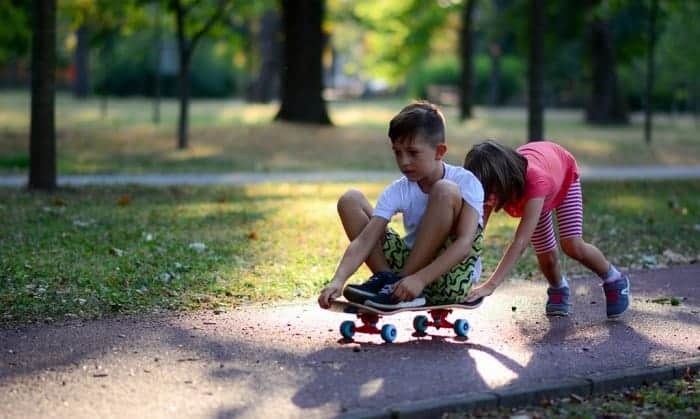 The Best Skateboards for 9 Year Old

Raising a future skateboarding phenomenon? Better start ‘em young by honing their skills with the help of the best beginner skateboards. Whether your kids are into … 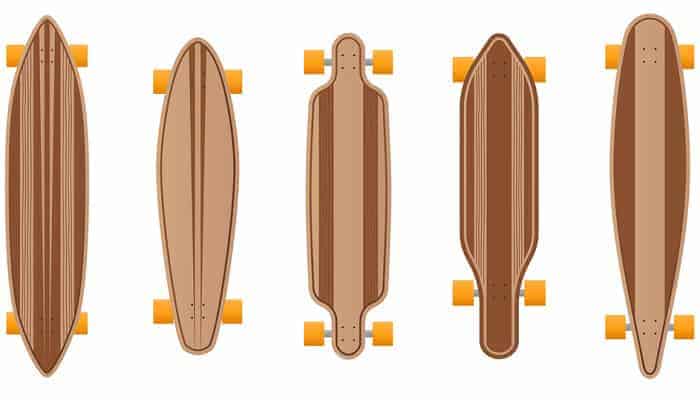 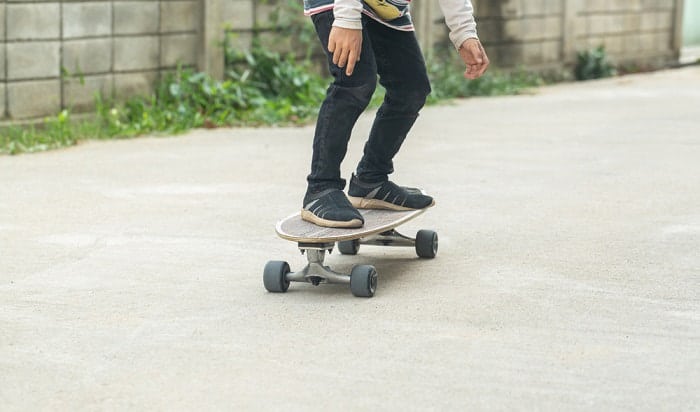 How to Pump on a Longboard Like a Complete Master?

The subject of how to pump on a longboard isn’t really addressed all that much, although it is popular among boarders who have discovered it. Pumping … 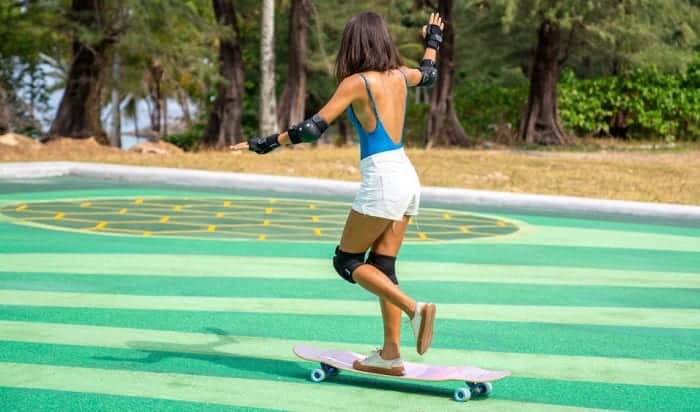 How to Stop on a Longboard?

Congratulations on getting to know the basics of owning a longboard! I remember the days where I just began skating. The feeling is great, and you … 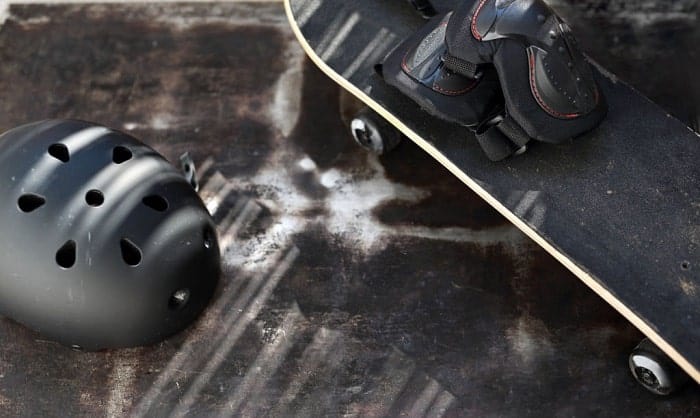 Still looking for stuff to give that is dope enough to warrant a skating guru’s approval? If you’re reading this, you probably need a hand, so …

Which Way Do Trucks Go on a Skateboard? – A Beginner’s Guide

Are you assembling your skateboard? It may have a lot of components, but you might find skateboard trucks on board the most confusing. Having prior knowledge … 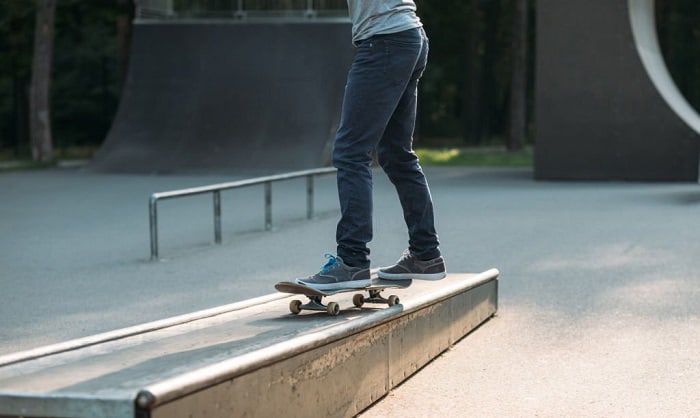 How to Build a Grind Box for Skateboarding? – Guide for DIYers

Making your DIY grind box will be very convenient for you, contributing to your skateboarding career. When it comes to creating your grind box, it’s straightforward … 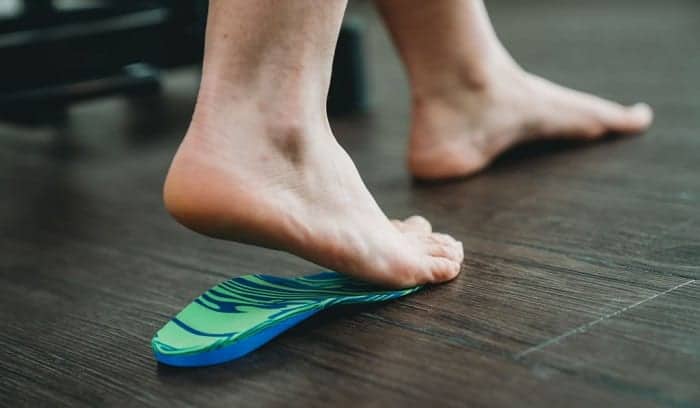 Before hitting the half-pipe or the skate park, every skateboarder needs a reliable pair of skate shoes with matching skateboarding shoe insoles that provide ample protection … 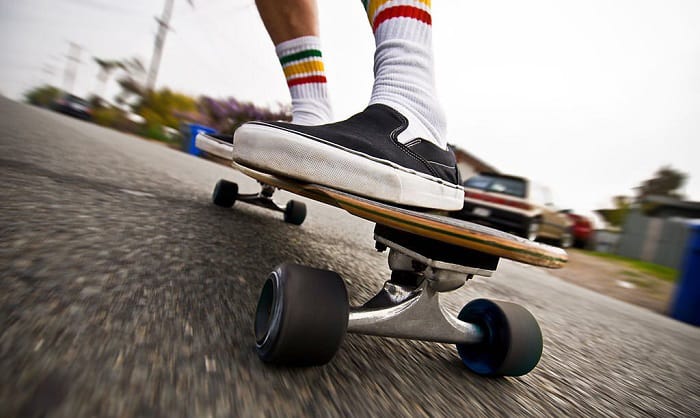 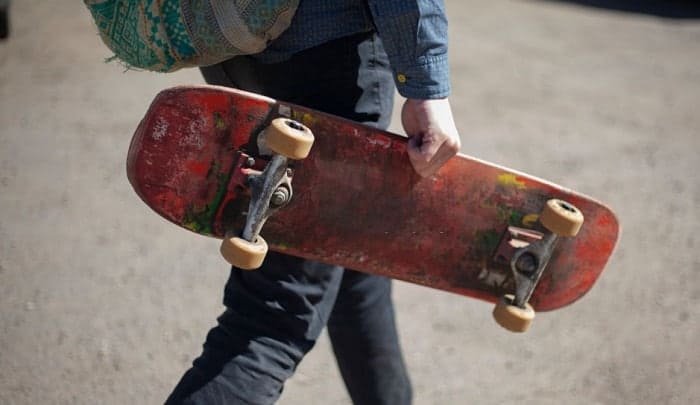 How to Carry a Skateboard? 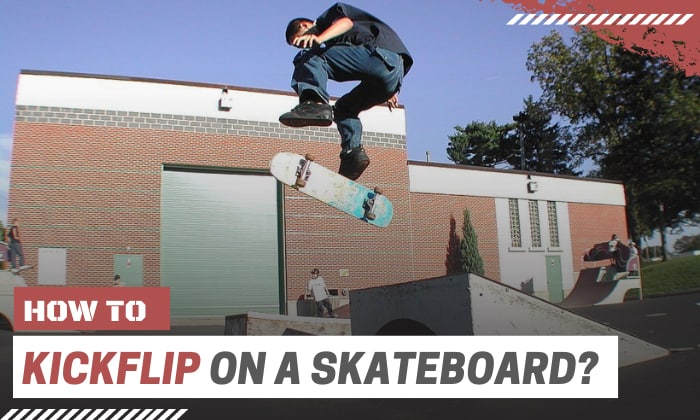 How to Kickflip on a Skateboard? – A Beginner’s Guide

Sometimes, basic jumps and ollies feel too plain that skateboarders want to try something new. Not that you should not learn these fundamental skills, but if … 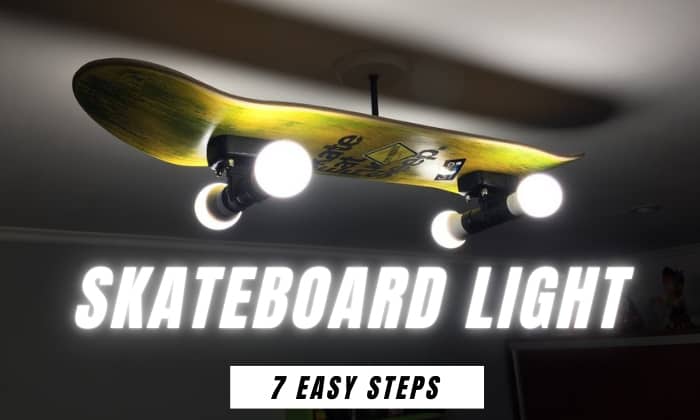 How to Make a Skateboard Light? – A DIY Series

Creativity knows no boundaries. It mixes well with skills and talent. And no matter your passion, there is always room for innovation. Yes, even with skateboards. … 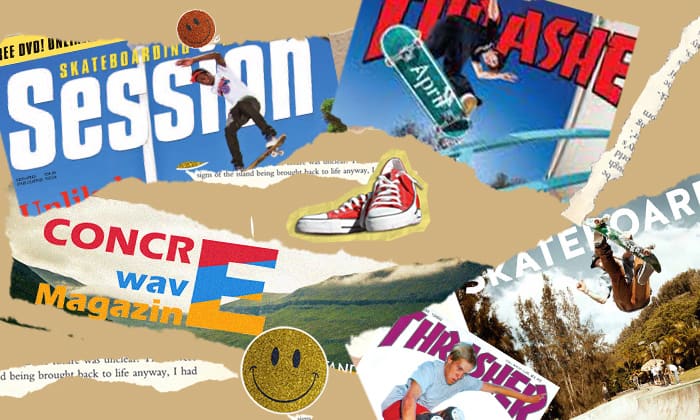 As a skateboarder, finding reliable sources of information about this sport is a tough job. For the sake of convenience, we often resort to the web …